Marco Polo christened it the "Most Beautiful Island in the World" yet Sri Lanka has a lot more going for it than just its good looks. Situated just 20 miles off India, the island formerly known as Ceylon is home to 20 million people and six World Heritage sites. 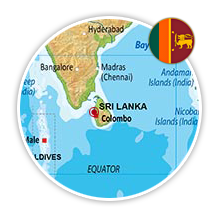 Discover more of Islands in the Indian Ocean

Marco Polo christened it the "Most Beautiful Island in the World" yet Sri Lanka has a lot more going for it than just its good looks. Situated just 20 miles off India, the island formerly known as Ceylon is home to 20 million people and six World Heritage sites. With 2000 years of culture, fascinating ruins, large numbers of elephants, pristine beaches, Buddhist temples, ancient monuments and endless water-sports, Sri Lanka is the perfect one-stop destination. Throw in luxury resorts, divine spa facilities, delicious cuisine and of course the famous Ceylon tea and you have a winner of a destination! Boasting far more attractions from jungle safaris, elephant sanctuaries and white water rafting to spiritual temples, sun-drenched beaches and mouth-watering cuisine, this once inaccessible country is quickly climbing its way up every globetrotter’s bucket list.

Best Time to Visit
Sri Lanka is round-the-year destination - there is always a good time to visit at least some part of the country. But Sri Lanka has two distinct monsoon seasons - the Yala monsoon and the Maha monsoon. Hence the months in between these seasons are the months that you should travel if you want to avoid getting drenched. The driest and best seasons in Sri Lanka are from December to March for the west coast, the south coast and the Hill Country. For the ancient cities region and the east coast it is from April to September.

Sip Your Way Through ‘Little England’s’ Tea Plantations. Sri Lanka is one of the most important tea producers in the world and its hill country is stunning. Colonial towns dot the landscape surrounded by tea plantations. Nestled in the heart of the hills, the formal colonial retreat of Nuwara Eliya, or “Little England,” is home to the country’s oldest tea estates. Learn the history of Ceylon teas, the role they play in Sri Lankan culture and everything about it from cultivation to cup. Not much of a tea drinker? Opt for a tea infused culinary lesson, therapeutic tea massage or rejuvenating herbal treatment.

No visit to Sri Lanka is complete without a safari through Yala National Park. Regarded as one of the best game parks outside of Africa, Yala boasts a plethora of wildlife from herds of elephants and adorable sloth bears to wild boars and over 100 species of birds. Yala has the highest concentration of leopards anywhere in the world!

Visit Adams Peak, Sri Lanka’s most sacred site. Join thousands of pilgrims for 2 months of the year as they pay homage to the first place that Adam stepped foot on earth when he was cast down from Heaven. Feel a great sense of accomplishment taking part in this spiritual journey.

Take the train for unrivalled views and for some timeless memories. Sri Lanka’s trains are like stepping back in time. They chug slowly along through hills and valleys. It is the slow journey that makes it special. Looking out over the mountains and tea plantations rival any view in the world and the people that you meet on the train will be remembered forever. So if you are planning a trip to Sri Lanka, make sure to take the time to travel by train. It will be an experience you will remember and cherish forever.

Visit Anuradhapura. Anuradhapura is the oldest within Sri Lanka’s Golden Triangle and an important heritage destination. Originally the countries’ capital city, Anuradhapura was rich in elaborate royal palaces, sprawling monasteries and bejewelled temples. Today the remains can be explored by wandering the parks marvelling at the dagobas (temples) and Thuparama some of which contain relics of Lord Buddha.

Visit the Temple of the Sacred Tooth Relic in Kandy. This temple houses Sri Lanka's most important Buddhist relic - a tooth of the Buddha. The tooth is said to have been snatched from the flames of the Buddha's funeral pyre in 543 BC, and was smuggled into Sri Lanka during the 4th century AD, hidden in the hair of a princess. The present Temple of the Sacred Tooth Relic is an imposing pink-painted structure surrounded by a deep moat. Worshipping at the temple is thought to improve one's karmic lot immeasurably.

Whale Watching. Located close to Galle, Hikkaduwa and Mirissa, head to Dondra Point for some of the best whale watching in all the seven seas! Spot majestic blue whales and sperm whales as they glide gracefully past your boat in the waters of Sri Lanka. Almost as big as jumbo jets, the thrill of seeing these majestic creatures is beyond compare.

Visit the Golden Temple of Dambulla. The ancient Dambulla cave temple has been an important site for both Hindus and Buddhists since the first century. This is Sri Lanka’s single most popular heritage site and the cave monastery is the home of Buddhist monks. Murals dating back some 2,000 years adorn the walls. There are also several shrines within Dambulla that house some 157 Buddha statues in various poses. The highlight has to be the reclining Buddha which extends to an impressive 15 meters. Dambulla also holds the crown as home of the biggest antique painted surface on earth thanks to the vibrant frescos upon the walls and ceiling.

Sri Lanka is a beginner surfer’s paradise. If you have never surfed before Sri Lanka is the place to do it. It is very easy to learn here and the conditions are perfect for the first timer. Hikkaduwa on Sri Lanka’s south west coast is the popular spot for surfing. The sandy break cushions your fall and the waves are not the gigantic intimidating pipes seen in Hawaii or Australia. Even expert surfers can enjoy themselves in Sri Lanka though. On the west coast there is a popular beach that offers bigger and better waves.