Founded in 1964 from two separate nation-states, Tanzania is home to Kilimanjaro, Africa’s highest mountain, and is one of Africa’s most popular safari destinations. 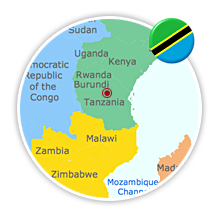 Tanzania: The Serengeti & Beyond
9 days 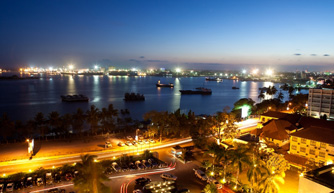 Tanzania: The Serengeti & Beyond - 9 Days

Founded in 1964 from two separate nation-states, Tanzania is home to Kilimanjaro, Africa’s highest mountain, and is one of Africa’s most popular safari destinations. A land of many wonders, it offers an un-paralleled diversity of fauna and flora. Serengeti, Ngorongoro, Kilimanjaro, Zanzibar, the names roll off the tongue like a roster call of Africa’s most alluring destinations, all packed into one country. But it's not just all about wildlife safaris, although it is home to the largest national park in the country, some of the best beaches on earth can be found in the Zanzibar archipelago. Mafia Island offers idyllic spots for swimming with the underwater world. Olduvai Gorge is literally the Cradle of Mankind while Stone Town and other UNESCO world heritage sites dot Tanzania. The scenery, topography and the very friendly people harbour the growth of excellent tourism. This combined with the fact that a tourist could enjoy beach holidays, game hunting, historical and archaeological ventures and certainly the best wildlife photographic safaris on the continent, make Tanzania an ideal choice for both first-time visitors and Africa old hands.

Tanzania enjoys temperate climates and is pretty much a year-round destination. But the best time of year to visit Tanzania for all round game viewing is between June and October, the dry season. October to December is peak time for tourists. Tanzania's coasts enjoy a tropical climate with long sunshine hours all year round.

Go on a safari at Serengeti National Park. This UNESCO World Heritage Site comprises of 1.5 hectares of savannah, a wealth of wildlife and offers the absolute classic African safari setting. Spread over 5,000 sq km, the park makes up 14% of the country’s land area, a conservation record few can match. Two World Heritage Sites and Two Biosphere Reserves have been set up here. The migration of millions of wildebeest and zebra starts here. The vast expanse of grasslands make the Serengeti fantastic for spotting lion kills because you can see the whole spectacle clearly. Among the best-known big game safari destinations in Africa, it is one of the most popular tourist attractions in Tanzania as you get to see the Big 5 here other than in Kenya. A hot air balloon ride over the National Park offers stunning views of the dawn just breaking over the park.
Climb the highest mountain in Africa. Mt. Kilimanjaro consists of three peaks, Shira, Kibo and Mawenzi, with the Uhuru peak on the Kibo crater rim being the highest. Climbing this dormant volcanic mountain isn’t easy however there are hikes available for the lower levels of the mountain. Explore the Shira Plateau, craters and wildlife while enjoying stunning scenic views. Those do not want to hike can explore the natural park surrounding the mountain, a UNESCO World Heritage Site. See the wide array of wildlife in and around Ngorongoro Crater. Quite possibly the most famous of all Africa’s conservation areas, this is one of the places where you stand a very good chance of seeing the Big 5. The crater floor, 100 sq km in area, lies 2000 ft. below the crater rim and contains herds of zebra, antelope, buffalo, elephant, lion, rhino and hippo. There are 25,000 larger animals within the crater itself. It is undoubtedly the best place to see the black rhino in Tanzania as well as the magnificent black-maned lions. There are lots of colorful flamingoes and a variety of other water birds around the Soda Lake on the crater floor. Just outside the crater’s ridge, tall Masaai herd their cattle and goats over green pastures through the highland slopes, living alongside the wildlife as they have for centuries.
See the Cradle of Mankind, quite literally, at Olduvai Gorge. It is a 300 ft. deep canyon excavation site where Dr. Leakey discovered traces of pre-historic man and animals dating back to 3.5 million years ago. Relax on the beaches of Zanzibar. The island of Zanzibar is bursting with an array of beaches. The east coast provides continuous coral reef with white sandy beaches, lined with coconut palms and small coves. Non-tidal beaches can be found along the northwest coast of the island, between Nungwoi and Kendwa, allowing for all day swimming whereas the coral cliffs and lagoon coves of the southwest allow for an escape to a less touristy spot. The southwest islands have secret beaches that make for perfect picnic spots whilst the northeast island of Mnemba is suggested to be one of the finest beaches in Zanzibar.
Visit a spice plantation and learn all about the spices and its beginnings in Zanzibar. Zanzibar and Spice is a romantic entanglement that dates back to the 16th century. It was these spice plantations that brought the beginnings of Zanzibar’s infamous slave trade. Renowned for its spices then, the island still produces cloves, black pepper, cardamom, cinnamon, nutmeg, breadfruit, jackfruit, vanilla and lemongrass.
Visit the historical sites at the UNESCO World Heritage site of Stone Town. One of the oldest living Swahili towns in East Africa, it comprises of interesting architecture of coral stone buildings in narrow streets, with a range of influences from various cultures and traditions being imprinted across the area. Established by Arab slave and spice traders in the early 19th century, Stone Town is the cultural heart of Zanzibar. Explorers, exotic spices, sea traders and Sultans are all part of the history of Stone Town and many historical sites remain intact and worth visiting.
Go Scuba diving off the Mafia Island. Situated off the coast of Tanzania, Mafia Island is the largest of a small archipelago of islands. Aquatic life is plentiful off the coast of the island, with coral gardens remaining unspoiled through the protection of the Mafia Island Marine Park. Situated between the Rufiji River delta and the open Indian Ocean, the park combines a diverse range of unique landscapes under the sea. You can go swimming with whale sharks, turtles and many other interesting species of wildlife.
Experience the authentic lifestyle of the Masaai tribe with a Masaai Cultural tour. Living close to the game parks, the Maasai are a world-renowned tribe situated in northern Tanzania, known especially for their unique customs and dress. Although very little is known about the origins of the Maasai tribe, their family history spans over a 2,000 year period. Stay the night and immerse yourself in the unique way that these people live in harmony with the wildlife around them.
Ruaha National Park. Located in the middle of Tanzania, the Ruaha National Park is the largest national park in the country. The park is named after the Hehe word “ruvaha,” meaning “river.” Filled with wild dogs, lions, leopards, elephants, cheetah, giraffes, zebras, impala, bat eared foxes and jackals, the park offers opportunities to get up close and personal with nature. Due to the parks somewhat remote location, you will be able enjoy viewing the wildlife without competing with hordes of other tourists.