The Philippines is a beautiful country, with lovely seas and beaches, picturesque mountains, unusual wildlife and a wonderfully historic past. For the beach-crazy, it’s got excellent seaside resorts and wonderful beaches. 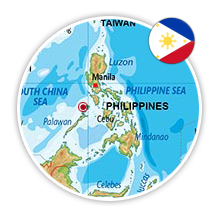 The Philippines is a beautiful country, with lovely seas and beaches, picturesque mountains, unusual wildlife and a wonderfully historic past. For the beach-crazy, it’s got excellent seaside resorts and wonderful beaches. With over 7,000 islands to choose from, the sheer variety of the Philippines is enough to satisfy the most demanding traveller’s tastes. From the volcanic landscapes of Luzon to the spectacular rice terraces of Banaue and the countless paradise beaches dotted around the islands, the choices are many and varied. There are lingering vestiges of the Spanish era. Malls, fast-food chains and widespread spoken English speak of the American influence in the later years. Yet despite these outside influences, the country retains very much its own unique entity. But at the end, it is the sweet natured, friendly locals that will capture the hearts and minds of the visitors!

Best Time to Visit
The country experiences two main seasons: dry - between January and June, and wet - between July and December. The dry season is probably the best time to be in the country as the rains are heavy during monsoon season. Also be aware that during typhoon season (late June to early December) tropical storms raging up the east coast can mean foul weather for days. January to May usually brings the best weather to most of the country. However, this is also the high tourist season. So book early!

Go trekking on the Banaue Rice Terraces. Located in northern Luzon, in the Cordillera Mountain range, sit hundreds of miles of terraces carved into the sides of the mountains. The terraces are over 2000 years old and have been declared UNESCO World Heritage Sites. Trek the ancient walls alongside emerald green rice paddies to see the villages of the Ifugo tribes.
San Agustin Church which is located in Manila, is a must see. Built in 1589, this beautiful church has survived seven earthquakes and two fires over the centuries and now remains as the oldest stone church in the Philippines. At the main entrance, there are exquisite carvings on the wooden doors. The lovely Mexican-influenced interior is designed in the shape of a Latin cross.
White Beach and Sabang Beach. Indulge in some sand and surf at the charming coastal town of Puerto Galera, well-favoured for its gorgeous beaches, excellent diving spots and wide diversity of marine species. The most popular beaches are White Beach and Sabang Beach, which also offer nearby shopping, dining and nightlife. Another popular attraction is the natural harbour of Muelle Bay with its rows of shops, restaurants and bars. You can also go snorkelling to see some of Asia’s best coral reefs or dive among old shipwrecks and hundreds of fish species.
Get lost in one of the biggest shopping malls in the world. Shopping in the Philippines can be quite a worthwhile experience. The country is known by many as a great handicraft centre. There are a lot of places to go and it all depends on what you intend to buy, and how much is your budget. SM City North EDSA, located in Quezon City is the biggest mall in South East Asia, SM Mall of Asia in Pasay is the 2nd largest mall in the Philippines after SM City North EDSA, and the 4th largest shopping mall in the world. If you are looking for something similar to a flea market, check out Greenhills Shopping Centre in San Juan.
Be adventurous and explore the country like a local either in or on a Jeepney. To get a sense of the place from the local’s perspective and to see how people interact, Jeepneys are a fantastic way to explore the country.The Filipinos opened the back of the old military jeeps left behind by the US after WW II. They then added two benches, gave them a colourful and unique design, decorative ornaments, flashy paintings, stars, dots and sometimes even extra lights. An average jeepney can carry 16 - 20 passengers, two up front next to the driver and 14 - 18 seated in the back facing each other on two benches. For want of space, people even occupy the roof!
A visit to see the Chocolate Hills cannot be missed. One of the top tourist attractions in the Philippines, the Chocolate Hills are unusual geological formations that consists of at least 1,268 individual mounds in shades of green and chocolate brown scattered throughout the interior of the island of Bohol. The hills vary from 30 – 50 metres high and are thought to be made from weathered marine limestone on top of impermeable layers of clay. Legend has it that a young giant named Argo fell in love with a mortal girl called Aloya. When she died he cried and his tears turned into the hills.
Glide on the Puerto Princesa Underground River. Located on the northern coast of the island of Palawa, Puerto Princesa is a nature lover’s paradise. Home to unspoiled landscapes rich in wildlife, this lovely town also lays claim to one of the world’s most unique natural phenomena, an underground river known as the Puerto Princesa Subterranean River. Protected within a national park, this natural wonder is the world’s longest navigable underground river. Guided paddle boat tours show intriguing rock formations and fluttering bats.
Go diving at the Tubbataha Reefs Natural Park. It is one of the best diving spots in the Philippines and the world. It has a pristine coral reef with a 100-m perpendicular wall, lagoons and coral islands. It covers 130,028 hectares, including the North and South Reefs, with the North Islet serving as a nesting site for birds and marine turtles.
Visit the smallest and lowest volcano – The Taal Volcano. Just 70km from Manila, it is the smallest active volcano in the world. Drive down the mountain along a steep, winding path. Then, take a boat ride to cross Taal Lake to get to the foot of the volcano. Here you can either trek or go riding on horseback to the top of the crater. Once here enjoy a novel swim in the sulphur infused lake which has formed in its crater. Then hike down its slopes as smoke emanates out of the earth to release its steam.