Mongolia, nicknamed the "Land of Blue Skies,” is a nation bordered by China and Russia, known for its vast, rugged expanses and its nomadic people. Mongolia is one of the last few places on the planet where nomadic life is still a living tradition. Its capital, Ulaanbaatar, centers around Chinggis Khaan (Genghis Khan) Square, named for the notorious founder of the 13th- and 14th-century Mongol Empire. Also in Ulaanbaatar are the National Museum, displaying historic and ethnographic artifacts, and the restored 1830 Gandantegchinlen Monastery. 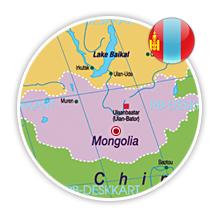