Nepal is the worlds 93rd largest country by area and the 41st most populous country. It is a landlocked country located along the Himalayas and bordered to the north by China and to the south, east, and west by India. Nepal is separated from Bangladesh by the narrow Indian Siliguri corridor and from Bhutan by the Indian state of Sikkim. Kathmandu is the nations capital city and largest metropolis. The mountainous north of Nepal has eight of the worlds ten tallest mountains, including the highest point on Earth, Mount Everest (Himalayas Mountains). More than 250 peaks over 20,000 ft (6,096 m) above sea level are located in Nepal. The southern Madhesh region is fertile and humid. 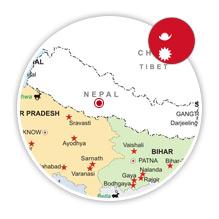