North India is a loosely defined region consisting of the northern part of India. The dominant geographical features of North India are the Indus-Gangetic plain and the Himalayas, which demarcate the region from the Tibetan plateau and central Asia. The term North India officially refers to the states of Punjab, Haryana, Himachal Pradesh, Uttar Pradesh, Uttarakhand and the Union Territories of Delhi, Chandigarh and Jammu & Kashmir. Other states which are not formally part of North India, but which are traditionally - culturally and linguistically - seen to be so are Rajasthan, Bihar, and Madhya Pradesh. North India has been the historical centre of the Maurya, Gupta, Pala, Harsha, Mughal, Marathas (Scindias), Sur, Sikh and British Indian Empires. 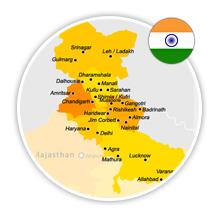