Going to Egypt is like traveling back in time. Famous for its ancient civilization and some of the world’s most famous monuments, including the Giza pyramids, the Great Sphinx and the ancient temples of Luxor dating back thousands of years, Egypt has been attracting visitors for years. 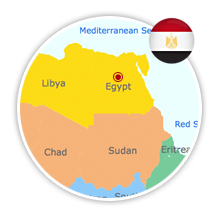 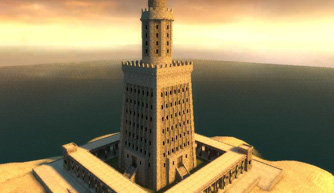 Trafalgar : 12 days from Cairo to Cairo (with a 8 day Nile river cruise) 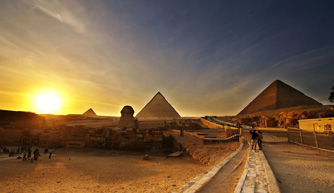 Trafalgar : 9 days from Cairo to Cairo ( with a 5 day Nile river cruise) 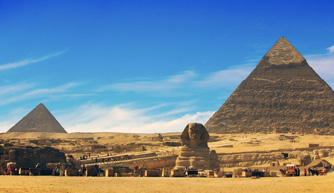 Trafalgar : 9 days from Cairo to Cairo (with a 4 day Nile river cruise)

Going to Egypt is like traveling back in time. Famous for its ancient civilization and some of the world’s most famous monuments, including the Giza pyramids, the Great Sphinx and the ancient temples of Luxor dating back thousands of years, Egypt has been attracting visitors for years. From sunrise in the desert on the edge of the Great Sand Sea, to sunset over the Granite Mountains of the Sinai where they meet the shimmering azure of the Red Sea, Egypt is a kaleidoscope of verdancy - palm and sugar-cane offset by glimpses of robed people on white mules - framed by the distant crust of the western desert. There are hundreds of nooks and crannies to visit. So much to discover in the land of Pharaohs. The Pyramids and the Sphinx; a million square kilometres of oasis and deserts, bordered by the blue Mediterranean, the Red Sea and the silvery green waters of the Nile. The land that gave birth to the first great civilisation needs little introduction. The pyramids, the minarets, the Nile – the scope of Egypt is magnificent!

The best time to visit Egypt depends on where you want to go. Generally speaking, winter (December to February) is the tourist high season and summer (June to August) is the low season in all parts of the country except on the coasts. Egypt's ancient sights are mostly located in desert areas, despite being along the banks of the Nile River. Hence travel to them is unadvisable in the searing heat of summers. Thus the best time to visit Egypt is from October to May. Though it is the peak travel season, the temperatures are a lot better.

Visit the famous Pyramids of Giza. These pyramids represent one of the greatest architectural feats by man. The last surviving member of the Ancient Seven Wonders of the World, the Great Pyramid of Giza is one of the world's oldest tourist attractions and the reason most people visit Egypt today. There are in fact three main pyramids in Giza; the Great Pyramid of Khufu (or Cheops), The Pyramid of Kafhre and the smaller Pyramid of Menkaura. Each Pyramid is a tomb to a different King of Egypt. While here take a look at the Sphinx. This cat like structure has mesmerised millions of people over ages. Don’t miss hopping on a camel or horse to ride to top of the hill overlooking the pyramids for an awesome view of all three pyramids aligned.

Take a trip to Abu Simbel. Vast and spectacular, this UNESCO listed site contains an incredible array of Ancient Egyptian monuments, the most famous of which are two massive Temples of Ramesses II. Don’t miss the main hall of the Great Temple which was cut directly into the sandstone and includes two rows of imposing statues of Ramesses himself, each one 30 feet high!
Temple of Karnak in Luxor. By far the largest temple to have ever been built, there are plenty of remains left to allow your imagination to think back to ancient times. The Temple of Karnak actually consists of three main temples, smaller enclosed temples and several outer temples located about 2.5 kilometres north of Luxor. One of most famous structures of Karnak is the Hypostyle Hall, a hall area of 50,000 sq. ft. with 134 massive columns arranged in 16 rows.

Felucca down the Nile. This is something you must do when visiting Egypt. Feluccas are sail boats that have been used on the Nile since the ancient times. Take short sunset sails in Cairo and Alexandria or opt for longer cruises which usually depart from Aswan.

Visit the Royalty at the Valley of Kings. The burial place of many of the great pharaohs, the valley contains 63 tombs and chambers, ranging in size from a simple pit to a complex tomb with over 120 chambers. The royal tombs are decorated with scenes from Egyptian mythology and give clues to the beliefs and funerary rituals of the period. Among other highlights, visitors can discover the tomb of famous boy-ruler Tutankhamen as well as the tomb of Ramses the Great and Ramses IV. However, the real one to that you simply can’t miss is Hatshepsut's Temple, which is phenomenal.

Go on a Nile cruise. There is no better way to trace the passage of Egypt’s history than to follow the course of the Nile. Almost all Egyptian cruise ships travel the Luxor-Aswan route which is safe, scenic and terminates at two of Egypt’s most important towns. Your boat will make many stops at famous temples, giving you the opportunity to travel through 5,000 years of ancient Egyptian history.

Plan at least two visits to the monumental Museum of Egyptian Antiquities in Cairo. With over 100,000 pieces in all, the Museum of Egyptian Antiquities in Cairo holds the most comprehensive collection of ancient Egyptian artefacts in the world. Among its most prized possessions is the iconic funeral mask of the boy king Tutankhamen, as well as a number of other objects related to this famous young pharaoh. Highlights also include the Royal Mummy Room containing 27 royal mummies from pharaonic times.
Get your bargaining shoes on and head to the expansive markets of Aswan. There is plenty to see and buy here and the view is one you will never forget. It will remind you of the marketplace from the movie Aladdin.

Go diving in the waters of Red Sea, off the coast of Egypt. The waters of the Red Sea are renowned for their spectacular visibility and features some of the most exotic seascapes. With its wide expanse of coral formation on the reefs, it is home to thousands of different sea creatures.

While in Luxor, do not miss out on a trip to the magnificent Luxor Temple. Located right on the Bank of the Nile in the heart of the town of Luxor, this temple is impressive with its sphinx lined walkways. The Temple of Luxor was built largely by Amenhotep III and Ramesses II around 1400BC. Its main purpose was to celebrate the festival of Opet. A mosque built inside the temple still exists and is one of the highlights of the site. From its Avenue of the Sphinxes to its looming archways and giant statues, the enormous Luxor Temple is a breathtaking site. And it is even more breathtaking at night when the entire temple is lit up in golden hue creating an eerie spectacle as shadow and light play off the reliefs and colonnades.