Famous for its classic savannah safaris, Kenya is a country of dramatic extremes and classic contrasts. Deserts and alpine snows; forests and open plains; the metropolis of Nairobi and colourful tribal cultures; freshwater lakes and coral reefs. 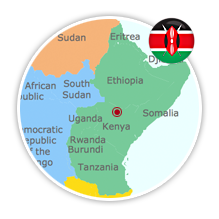 Famous for its classic savannah safaris, Kenya is a country of dramatic extremes and classic contrasts. Deserts and alpine snows; forests and open plains; the metropolis of Nairobi and colourful tribal cultures; freshwater lakes and coral reefs. In fact, to say Kenya is Africa in microcosm would not be stretching the point. Wildlife safaris have been the mainstay of Kenya’s tourism for decades, and several Kenyan parks, like Tsavo National Park, are among the best places in Africa to see lions, elephants, leopards and the famous wildebeest migration. Kenya rates as one of the top five bird-watching destinations in the world. Other activities include trekking Mount Kenya, ballooning over the Masai Mara and snorkelling in Malindi on the Indian Ocean coast. There are a million different reasons to come here, and picking just one is nigh impossible.
Best Time to Visit
The best time to visit Kenya is during the dry seasons, from January to March and July through October. The best time to go on safari in Kenya and see the Wildebeest Migration is from July to October. The coastal Kenya is best visited during the months of December through March to fully enjoy the beaches. While Northern Kenya can be visited year round, a hike to the summit of Mount Kenya is best done between January - February, and July - October.

Safaris. There’s nothing more famous about Kenya than going on a safari to one of the many national parks or reserves located throughout the country. The vast wildlife found in Kenya can be found throughout the country’s wildlife parks and reserves. The most famous wildlife viewing sanctuaries include Maasai Mara, Amboseli, Lake Nakuru and Tsavo East. Try and catch a glimpse of the African Big 5 including lion, leopard, elephant, buffalo and rhino.
See one of nature’s largest migrations. The Wildebeest Migration. Maasai Mara game reserve in Kenya, along with the Serengeti in Tanzania, share the annual Wildebeest migration. The captivating event is one of the few natural land migrations that remain intact in the world today. Every year, 1.5 million wildebeests and zebra migrate overland in search of food and water. The event takes place between May and August, depending on the rainy season.
Curl your toes in the white sandy beaches of Mombasa. Mombasa has an abundance of white pristine beaches. The clear turquoise waters of the Indian Ocean lap gently at the sand, providing a romantic and peaceful setting for many. For the adventurous ones, there is scuba diving and snorkelling to be done in the numerous Watamu coral reefs. Visit the Watamu Marine Park to get a closer look at the sea wildlife. For those who prefer history, explore the Gedi ruins and Fort Jesus which are a wealth of information.
Visit the Great Rift Valley. Home to around 12 volcanoes and 7 lakes, this spectacular geological wonder of the world has amassed a wealth of attractions that shouldn't be missed. See the famous pink Flamingos and other birds at Lake Nakuru. Witness geysers erupting as high as 5 meters at Lake Bogoria. Explore the awe inspiring gorge at the Hell’s gate National Park. It is here that the famous Lion King and Lara Croft movies were shot.
Scale Africa’s second largest mountain – Mount Kenya. Located in Central Kenya, it rises to 5,199 meters above sea level making it the tallest mountain in Kenya. There are paths that have been created over time that ensure safety and maximum mountain climbing experiences with trained and capable guides. Its series of peaks are crowned with snow, and its slopes are covered with forest. Mount Kenya National Park offers an amazing array of wildlife ranging from the elephants, tree hyrax, white tailed mongoose, suni, black fronted duiker, mole rat, bushbucks, water buck and elands. There are incredible views of the varied geological formations, glaciers, vegetation and a birdwatchers paradise.
Hand feed a Giraffe at the Langata Giraffe Centre. Run by the African Fund for Endangered Wildlife, it is a sanctuary for the rare Rothschild giraffe. Here you can observe, hand-feed or even kiss the giraffes from a raised circular wooden structure and it is quite an experience.
Visit Tsavo, the largest national park in Kenya and one of the largest in the world. Due to its size the park was divided into Tsavo West and Tsavo East. The Tsavo West has spectacular scenery with a rolling volcanic landscape while Tsavo East has more open savannah than its western sibling. Tsavo National Park is the ideal destination in Kenya for people who seek solitude and privacy as well as the chance to explore the wilderness.
Take a cultural trip on the island of Lamu. Over the centuries, the island has been shaped by local Bantu African tribes, Arab traders and Portuguese explorers. The mix of cultures has created a fascinating history and a unique Swahili culture. It has managed to stay unspoiled and untouched by the mass tourism that has hit much of Kenya’s coastline. As the oldest living town in Kenya, Lamu Town has retained all the charm and character built up over centuries. There are no roads on Lamu Island, just alleyways and footpaths. Residents move about on foot or by boat, and donkeys are used to transport goods and materials.
Go on a Snake Safari at the Bio Ken Snake Farm. This excellent farm is by far the best of the snake parks along the coast. It was established by the late James Ashe, a reptile expert and former curator from the National Museums of Kenya, who achieved such recognition in his field that he even has a bush viper named after him. You can go on a day safari to look for snakes in their natural habitat.
Visit the quirky Rail Museum in Nairobi. This interesting little museum displays relics from the East African Railway. There are train and ship models, photographs, tableware and oddities from the history of the railway. One such is the Engine Seat that allowed visiting dignitaries like Theodore Roosevelt to take pot shots at unsuspecting wildlife from the front of the train. See the dozens of fading locomotives in various states of disrepair, dating from the steam days to independence, including the steam train used in the movie Out of Africa.