With over 17000 islands, to say that Indonesia is vast is a bit of understatement. The worlds largest Archipelago stretches across 3 time zones along the Equator. The diversity among these islands is astonishing. 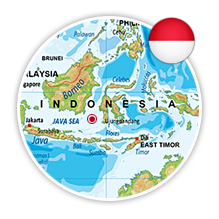 With over 17000 islands, to say that Indonesia is vast is a bit of understatement. The world's largest Archipelago stretches across 3 time zones along the Equator. The diversity among these islands is astonishing. From the lush rainforests of Borneo to the arid landscapes of Timor, from the Hindu-Buddhist influenced culture of Java to the "stone-age" ones in Papua, from luxurious resorts on Bali to atolls where all you find is a few palm trees. A land of so many cultures, people, animals, customs, plants, artwork and food that it is like 100 countries melded into one. Dramatic sights are the norm. There’s the sublime in an orang-utan lounging in a tree; the art when a Balinese dancer executes precise moves; the idyllic when you set your eyes upon a deserted stretch of blinding white sand on Sumbawa set off by azure water and the solemn in the quiet magnificence of Borobudur. Indonesia beckons the traveller to discover its myriad layers and embrace its serenity and sensuous beauty.

Indonesia has a fairly even climate year round. Instead of 4 seasons, it has only 2 – wet and dry. There are no extreme summers and winters in Indonesia.

The wet season falls between October and April (low season) and tends to come in sudden tropical downpours. It is at its highest intensity from October and varies across the archipelago. From December to February rains can make travel very difficult.

The dry season falls between May and September. This is the best time to visit Indonesia as the days are warm and there is hardly any rainfall. But the humidity factor is high even during dry season.

Visit the Golden Mosque. Drive through the wastelands of suburban South Jakarta and eventually you will see a gold domed mosque! Known as Masjid Kubah Mas, all the domes, pillars, chandeliers and other ornaments are covered by pure 24 carat gold.

Take a boat and visit the Komodo National Park in search of the Komodo dragon - the world’s largest lizard. These humongous-sized lizards evoke the dinosaur age and despite their large size (average length of 2 to 3 metres), they are very fast and can pounce on their prey in an instant.

Visit the scenic fishing villages at Amed and learn freediving, one of the best ways to take in the world’s oceans and its abundant marine life.

Visit Gunung Kawi in Bali. One of Bali’s oldest and largest ancient monuments, it consists of 10 rock cut shrines. Each shrine is believed to be a memorial to a member of the 11th-century Balinese royalty and is cut out of the rock face in imitation of actual statues.

Visit Borobudur. The biggest Buddhist temple in the world. Here witness the magical moment of the day as sun rises over Mount Merapi. Breathe in the fresh morning air. Let the beauty of the scene rejuvenate you as no other can.

Visit the Uluwate temple. Located on the southernmost tip of Bali, it is perched precipitously on atop sheer cliffs that drop straight into the pounding surf. This is one of the grandest and oldest temples in Bali that is built in 11th century.

Experience the magic of Kecak Dance at sunset. Kecak is a dance performed by a circle of 150 performers who chant Cak while the story of how Hanuman helped Ram defeat Ravan from the Ramayana is danced.

Wander around the Agung Rai Museum of Art in Ubud. This museum has an extensive collection of paintings by Balinese, Indonesian and foreign artists in classic Balinese and contemporary styles.