Tibet is a region on the Tibetan Plateau in China, Asia. It is the traditional homeland of the Tibetan people as well as some other ethnic groups such as Monpa, Qiang and Lhoba peoples and is now also inhabited by considerable numbers of Han Chinese and Hui people. Tibet is the highest region on Earth, with an average elevation of 4,900 metres (16,000 ft). The highest elevation in Tibet is Mount Everest, earths highest mountain rising 8,848 m (29,029 ft) above sea level. 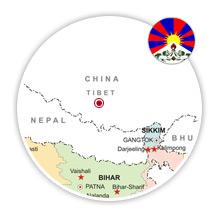